This tutorial shows how to create and use the Geolocation service in an AngularJS app.

If you are interested in how to quickly get the Google Map plug-in up and running in an Appery.io Ionic 5 application capable of identifying and storing location data, check this document.

You can also check our Ionic 5 Google Maps Tutorial, where we demonstrate how to use this component in an Ionic 5 app. As part of the app design, the Geolocation service is added to show current coordinates on the map.

To learn more about the component, and any other settings or options, please see the geolocation plugin documentation page.

Instead of invoking services in the code editor with subsequent auto completing, you can use a drag and drop feature to invoke services.

Watching position is a great feature that tracks current location. Let’s add it to the app.

The Geolocation_watchPosition method begins listening for updates to the current geographical location of the device running the client. It is an asynchronous function and returns the device’s current position when a change in position has been detected. When the device has retrieved a new location, the geolocationSuccess callback is invoked with a Position object as the parameter.

This is how it should look: 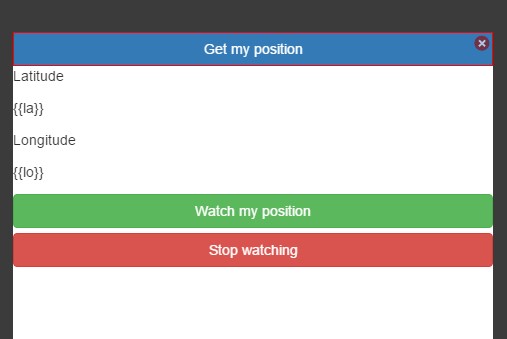 The notify event is used because you are going to receive coordinates many times. The received data is an object ({result: Geoposition, isSuccess: true} if successful and {result: PositionError, isSuccess: false} if unsuccessful). That is why you should check isSuccess in code.

The Geolocation_clearWatch method stops watching for updates to the current device’s geographical location by clearing the Geolocation_watchPosition referenced by watchID.
watchId is returned in the deffered object that was created when service invoked. You can obtain it and then kill this watcher. It’s possible to create several watchers in the app.
Call clearWatch() to kill them all.

You are ready to test the app.

The Location Service of your device must be enabled.

New coordinates must significantly differ from current ones to be catched. So don’t expect testing this feature when pacing the office.