What is Server Code?

Server Code allows writing custom app code using JavaScript that will run (execute) on the Appery.io server. You write the logic inside a Server Code script. A script can be easily tested right inside the Server Code dashboard.

With Appery.io Server Code option, you can:

Server Code allows writing any app logic. For example, in the script you can:

The Server Code dashboard has information about your scripts, libraries, and statistics.
Working with server codes is organized under the Server Code tab, where the lists of scripts (or script folders) and libraries are organized in the left view:

The Server Code page appears empty if your subscription expires (Subscription status: “Your subscription has expired”). To regain access, sign in any time and purchase a paid plan (or renew your suspended plan payment).

Server Code uses JavaScript as the language to write the script logic. A script is where you write/develop your logic. You have access to almost all the standard JavaScript APIs.

Is Server Code the same as Node.js?

Both Server Code and Node.js are based on Google V8 JavaScript engine, but Server Code doesn't run Node.js.

When you open a script or create a new one, the Script view opens. The API information block contains information about your script: Service URL, Description URL, and Alias: 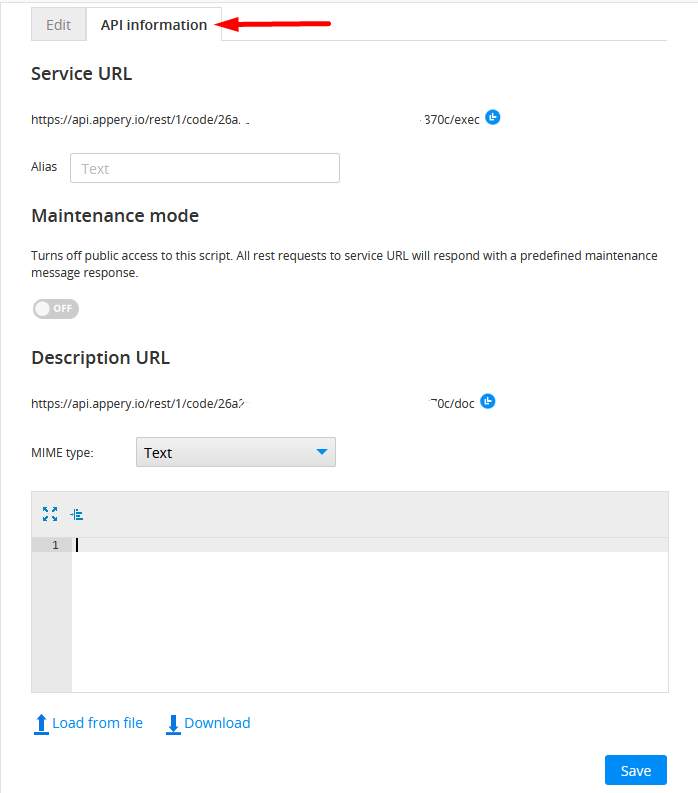 You can turn off public access to this script by clicking the toggle under Maintenance mode. That means that all rest requests to the service URL will respond with a predefined maintenance message response.

While editing your script in the JavaScript editor under the Edit tab, you can use Autocomplete and Help hints.

The source code editor has other useful features. Check this link to learn more.

To create a new script, click the Create script button.

When a new script opens, you can select the Load from file option to upload the previously saved or prepared script or use the predefined snippets created by the Appery.io team: 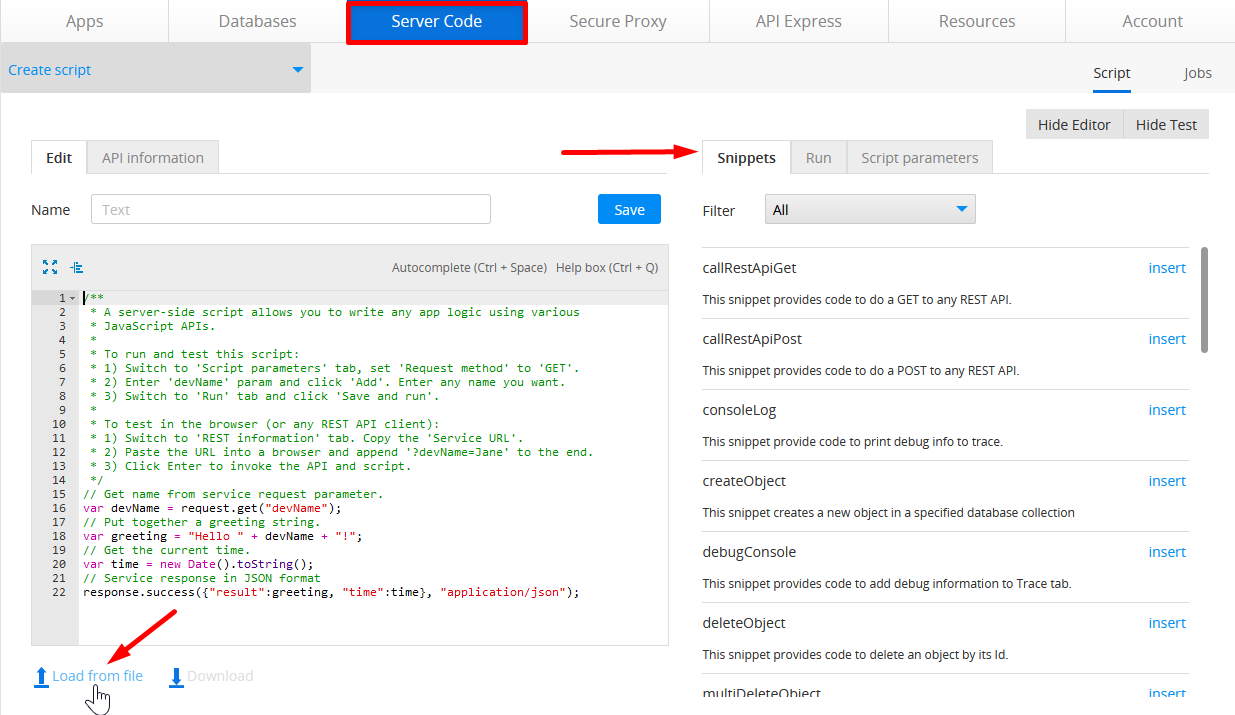 Every Server Code snippet provides some out-of-the-box piece of code that you can quickly import into your script and start using it. It actually is a script plus any dependent libraries. Click insert to add it to the script code, name the script, and click Save: 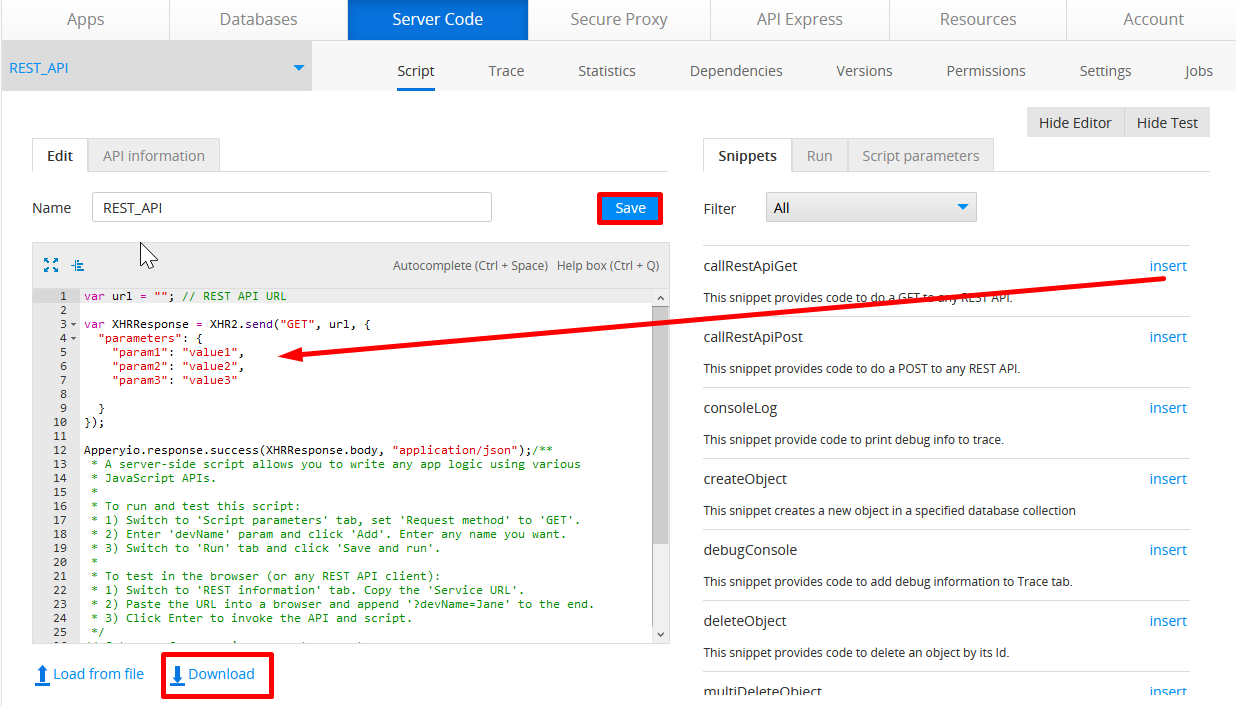 Now, the script is added to the Scripts list in your App Builder Server Code tab and you can select the Download option to save the script for future use.

You can also create folders to organize your scripts. Please read here for more details.

When you select your script on the list in your App Builder Server Code tab, the following views appear where you can:

Using in an App

Every Server Code script has a REST API which you invoke from the app. Inside the App Builder, we offer a wizard to import (generate) the API for the script automatically. Go to Using APIs in an App to learn more.

To the app (or the outside world), a script is simply a REST API. Another way to look at it, Server Code allows you to create custom APIs very quickly.

Server Code provides a number of out-of-the-box libraries. A library can be included in any script. This allows you to invoke any function from the library.
To create a new library, click the Create library button.
You can also create custom libraries.

You can also organize your libraries: under the Server Code tab, scroll down to the Libraries section, select the library, and click Load from file (to upload the previously saved or prepared library) or Download (to save the library for future use): 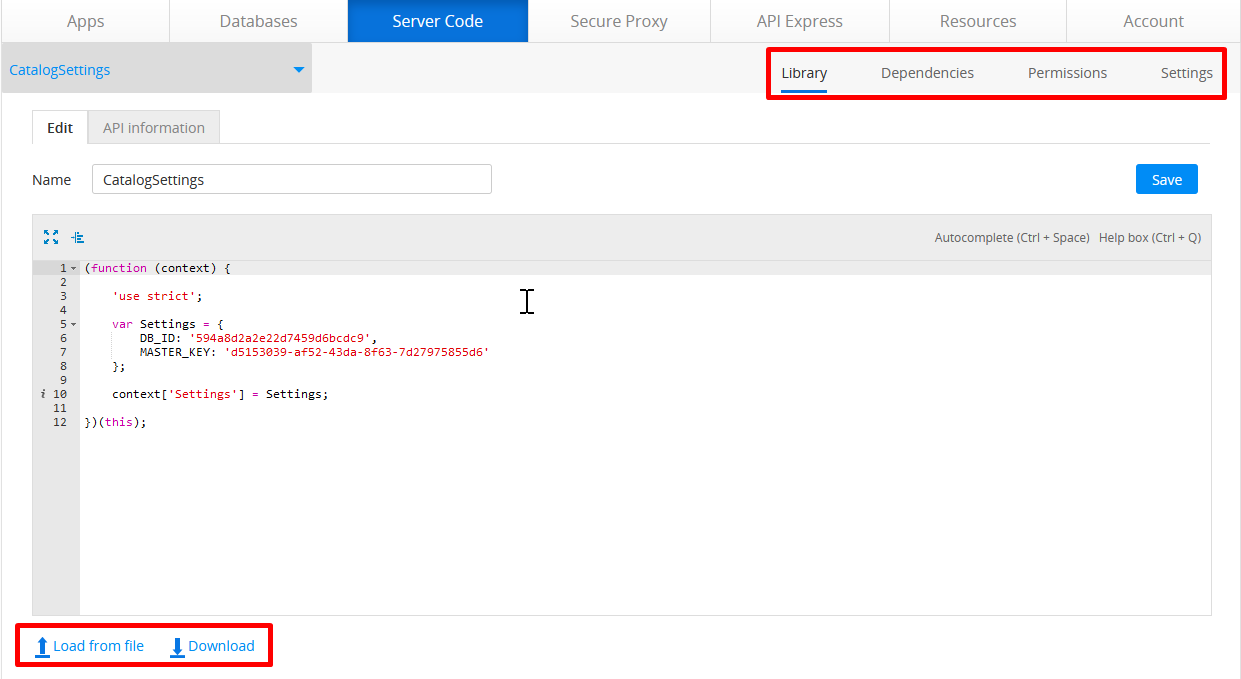 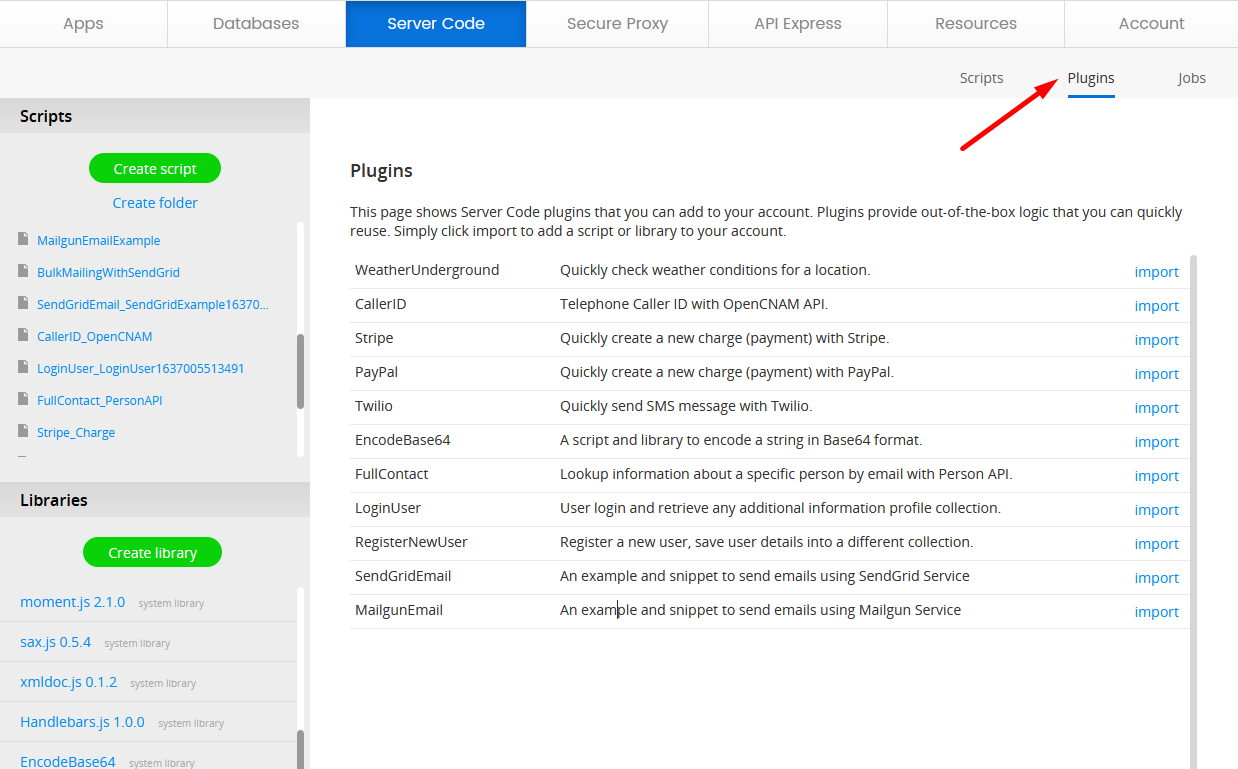 A script can be scheduled to run periodically. Scheduling jobs is managed from under the Jobs tab: 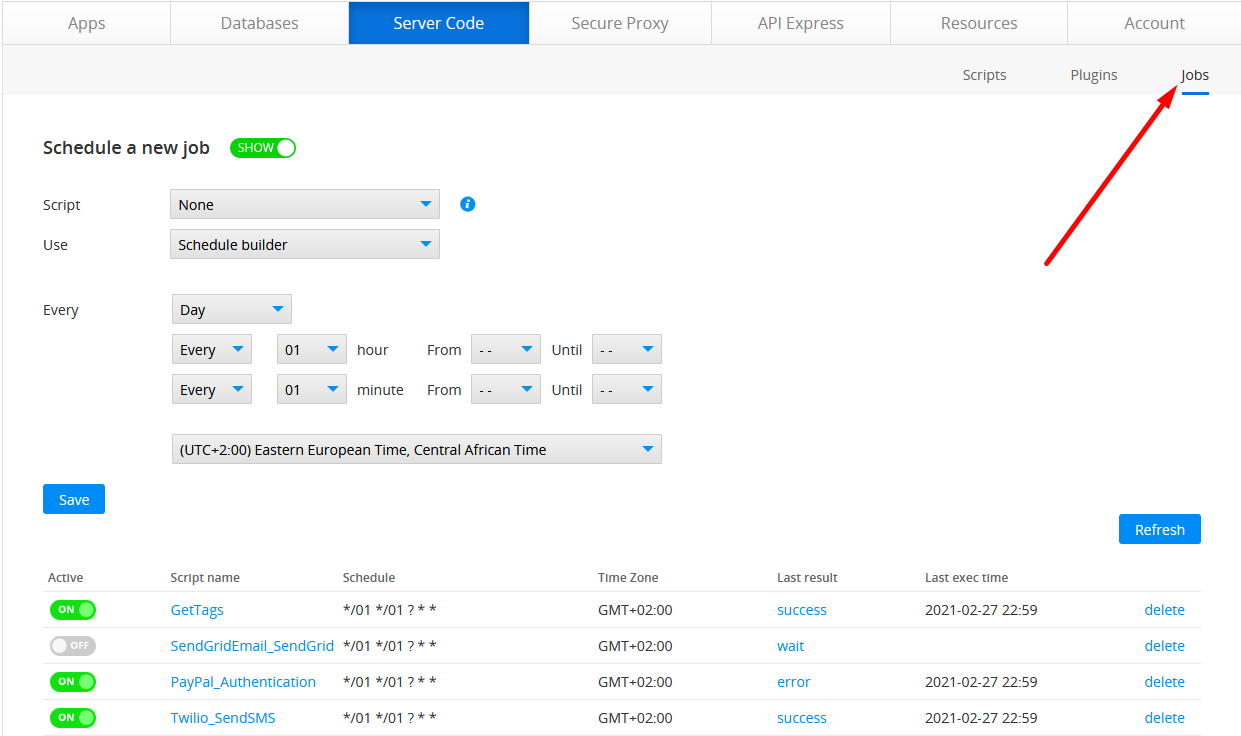 For example, you can schedule a script to run every 24 hours to check the database for inventory levels. 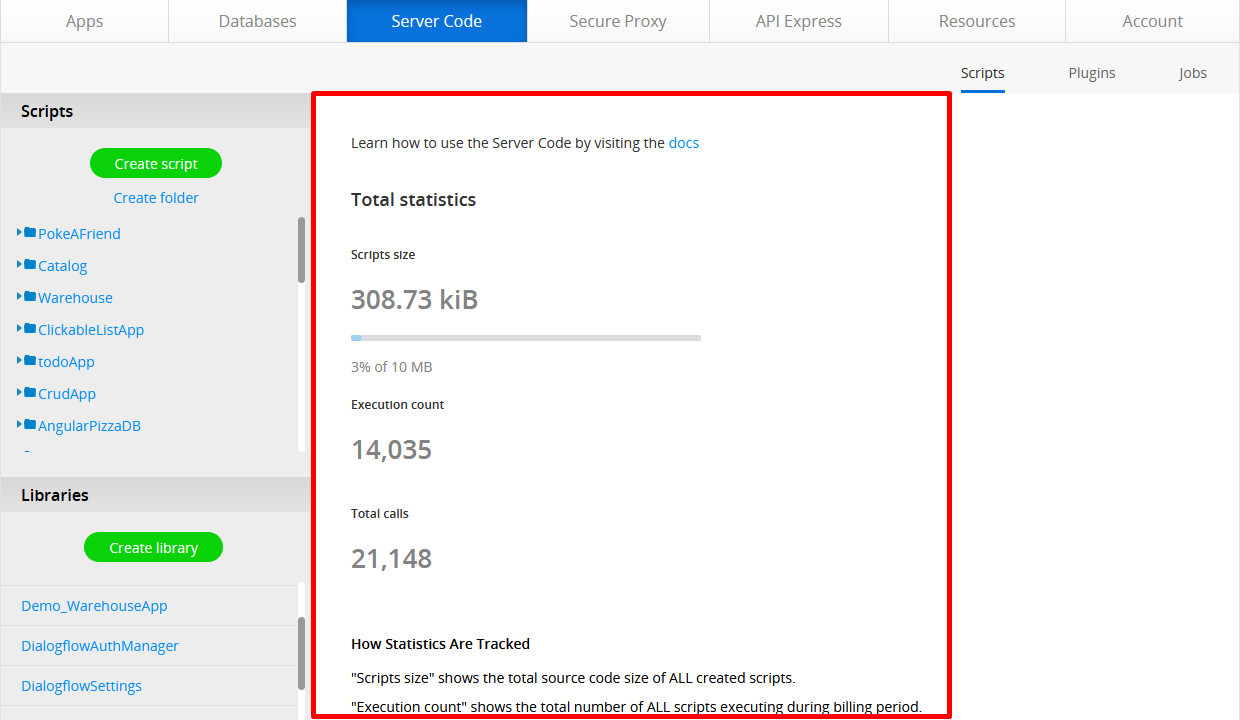 The following information about all your scripts is available:

There are also statistics separately for each script when you open a script for editing.