Every Ionic 5 app that you create in Appery.io is based on Apache Cordova (PhoneGap).

In an Appery.io Ionic 5 project, three main capabilities are offered:

Appery.io provides a set of pre-installed plug-ins that are available immediately once the new project has been created and the corresponding Ionic Native plug-ins will be automatically added to the project and included in the app module.
This is nice because you can easily enable many powerful mapping features that allow accessing native device features such as camera, contacts, and much more. 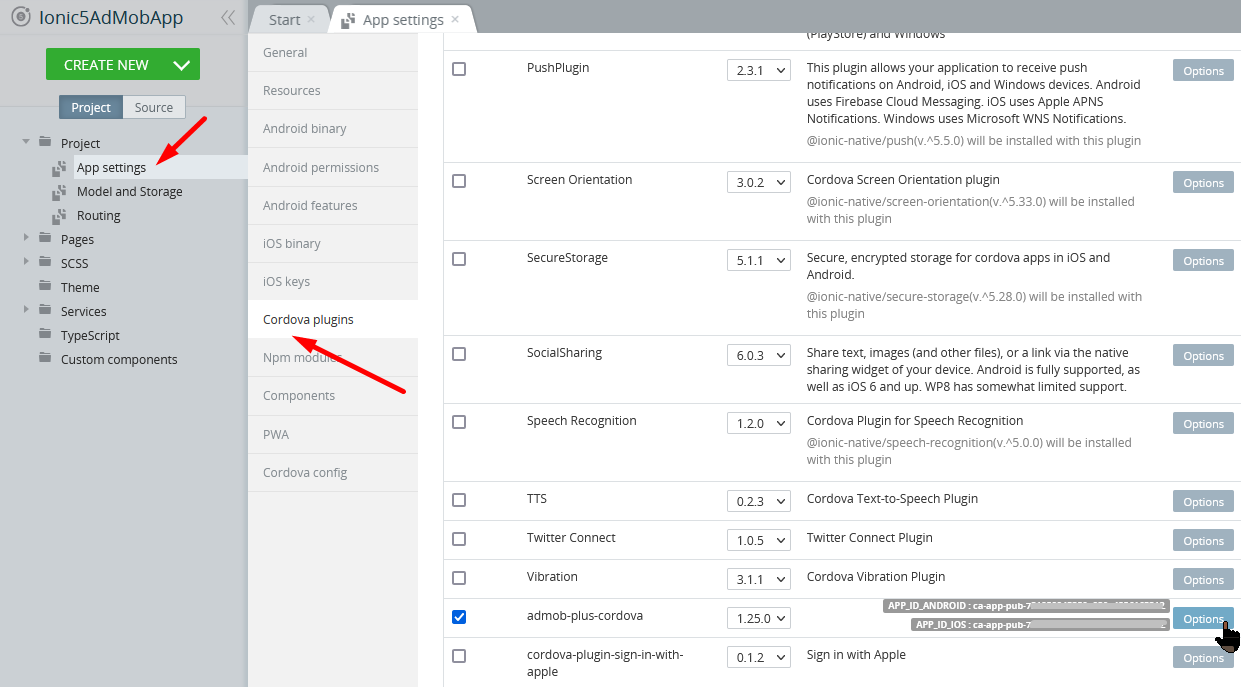 Please be informed that only enabled (checked) plug-ins will be included in the binary application and can be used for any target device type in events, services, etc.
To include the needed plug-ins in your app, you need to check the corresponding check boxes to enable them.
Also, you may decide not to enable some of them (or unselect them all by clicking the corresponding button) in your project in order to decrease the app size.

In this view, managing permissions is disabled since the core Cordova plug-ins are available to the entire team.

By adding custom Cordova plug-ins you can significantly expand the app functionality without the need for configuring additional source files.
There are two ways (a) needed Cordova plug-in(s) can be added to an Appery.io app:

There are many such plug-ins on the internet but finding an appropriate plug-in may take time as not all of them get updated regularly and may be incompatible with other app functionality.
This is why any help (and/or debugging) with your 3rd party Apache Cordova/PhoneGap plug-ins is not covered by our Support policy.

To work, this Ionic module then has to be imported under the CODE panel of the corresponding page (if you add it to the app page, it will be available for all project pages):

You can check this section to review how to add native device functionality to your Appery.io Ionic 5 application.

Please note that the Ionic plug-in version and the dependency (module) version are not the same things and they do not have to be of the same version.
Actually, they are not even connected and can be modified independently.

Please check this tutorial, where the working combination of versions is provided but you are free to add the version(s) you like (the most current version being the best choice in most cases).
However, be informed that the best practice is to carefully read the corresponding documentation before.

Ionic versions of all the native plug-ins are modified concurrently.

Apps with imported 3rd party Cordova plug-ins do not work in the https://docs.appery.io/docs/apperyio-tester-app app. Therefore, if your app uses 3rd party plug-ins, you need to install the app directly on the device or use the Live Debug feature to test this functionality.