Appery.io enables you to import Cordova plug-ins for use in apps without the need for configuring additional source files.

Before you update to a new library version it's important ​that you create an app version so you can go back to it in case something doesn't work.

Before the plug-in can be used in your app, you need to import it to Appery.io. You can choose one of the two ways to do it:

Be informed that when creating an app with Cordova plug-ins it is important that the needed plug-in be imported before you proceed with the app UI or create it from a backup.

From now on, when you open your projects you’ll see this plug-in among the imported plug-ins: 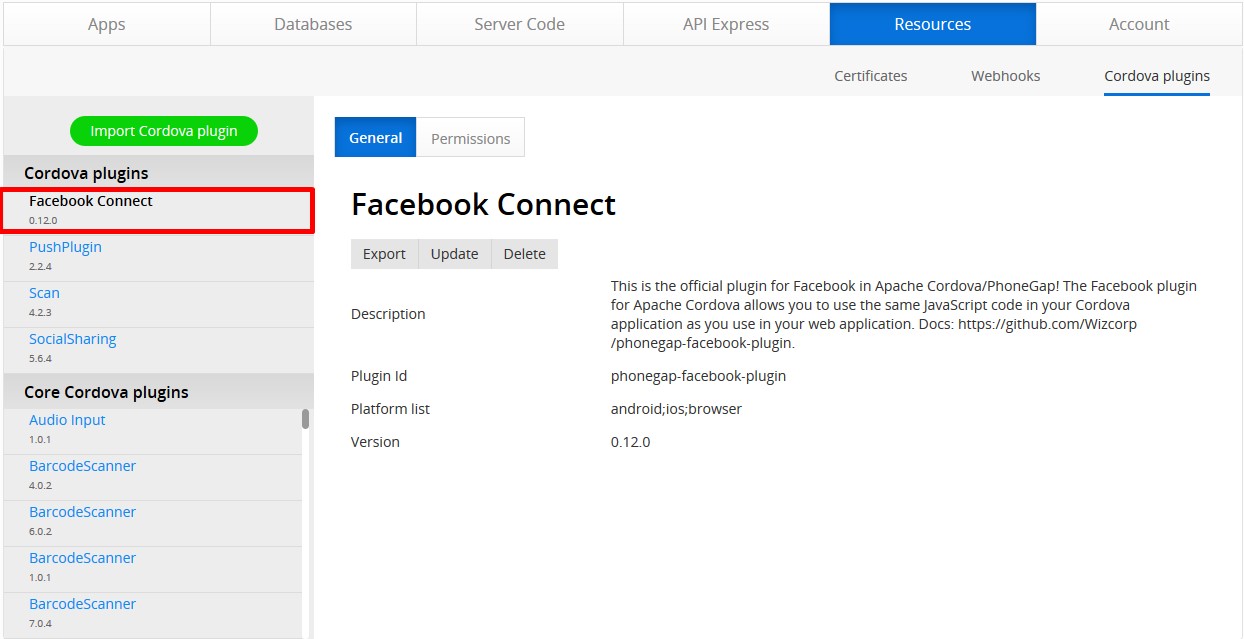 Once imported, the plug-in is added to the account Cordova plugins list. Now, as you need to use the imported plug-in for some particular project, in the app, open App settings > Cordova plugins > Imported Cordova plugins, enable it, and click the SAVE button at the top:

For correct work in Ionic 4 projects, the imported plug-ins must be correctly defined under the MODULE tab:

A custom Cordova plug-in permission can be managed by selecting the Permissions tab when viewing plug-in details.

Below are some examples of how custom plug-ins can be used in Appery.io projects.

To test the app, you must build the binary and launch the app on your device.

Some Cordova plug-ins require initialization parameters to work properly. The phonegap-facebook-plugin, for example, requires APP_ID and APP_NAME variables to be specified.

Go to App settings > Cordova plugins and click the Options button next to the plug-in. A modal window opens, where the necessary options can be added and specified. Click Save options.

The Options buttons will change to dark blue when at least one parameter is set.

Stuff You Should Know

When working with plug-in parameters:

There are several important issues to note when using Cordova plug-ins:

Here is a great resource to help you learn Cordova basics:

Our support team is not able to provide help or debug assistance with every 3rd party custom Cordova plug-in since it's impossible to be familiar with all of the plug-ins out there.

There are many reasons why a custom plug-in might not work: